Overheating of certain solar water heating designs is a growing concern in the industry. Dangerously high water temperatures, even boiling can be achieved with the associated risks of injury.

Such system designs rely on a passive principle known as thermosyphon to enable heated water to naturally rise into a storage vessel. These are the systems that typically require a tank on top of the roof.

The problem with such simple passive designs is that there is no mechanism of controlling maximum temperature as the thermosiphon process cannot be turned off. Example of the type of system which can be prone to overheating.

Particularly when the home owner is away, on holiday for example, without water being drawn off the system will heat untill the safety valve blows. At other times of low water usage tank temperature can reach scalding temperatures.

Whilst the problem can be reduced by adding thermal tempering valves, which mixes cold water with the hot, to avoid excessive temperature at the tap. Extra cost and additional maintenance are incurred which make these often low priced systems less attractive.

The challenge with using solar energy is that the sun is a highly variable power source, a fact which is exacerbated in a country such as South Africa, due to its great variances in latitude from the north to the south of the country.

Because of such variances the ability to provide control becomes all-important so that systems can deliver acceptable performance from the low sun conditions of winter whilst not overheating in summer. The alternative is to undersize collectors which reduces overheating but does not deliver any significant benefit in winter when hot water is needed the most.

Particularly prone to this problem are integrated or compact vacuum tube versions of these designs. (Pictured above) It should be noted however that it is the integrated close coupled system design, rather the vacuum tubes themselves, that create the problem.

Conversely the system design known as an “active split system” where in many cases the existing geyser can be employed and with the water circulated by use of a pump, is not prone to overheating since it is able to harness the power of the more efficient technology by providing failsafe control. It also has aesthetic benefits, not requiring roof top tanks.

This is the design advocated by Sky Power as it resolves the issue of overheating and simultaneously enables year round performance through its ability to provide control. 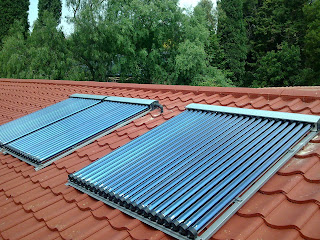 The ability to control circulation effectively provides the ability to throttle back thermal delivery once the desired temperature has been achieved. In this way systems remain safe even when left unused for extended periods. Such as when the owner is away on holiday for example.

View all posts by: admin